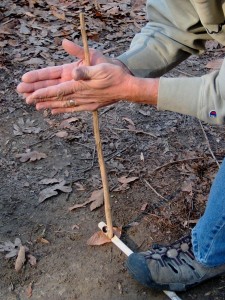 Friction Fire Methods of Bow-and-Spindle and Hand-Drill involve using a spindle on a hearthboard to generate heat and char in order to create an ember. The most successful material for this purpose is a non-resinous soft light wood that produces a slightly fibrous coffee-colored powder known as char. I prefer to make the spindle and hearthboard from the same piece of wood as this produces the best friction and does not wear out unevenly. The spindle should be straight with a rounded blunt end for the friction head, and the other end should have a longer taper so that it will be sharper, enabling it to spin easily in the socket or bearing block. The point of this writing is to describe the design elements found in the hearthboard as it is the foundation of this fire making method.

The hearthboard usually includes a slight pit or depression that keeps the head of the spindle stable and centered while being turned. In addition, there is almost always a notch included that serves two functions: one, to collect the char produced by the rapidly turning spindle, enabling it to collect heat as it grows with each subsequent turn, and two, it allows air to access the hot char, thus providing the heat-fuel-air trio needed to create a live coal once proper temperature is reached and sustained. Each of the following hearthboard types includes these two vital elements. 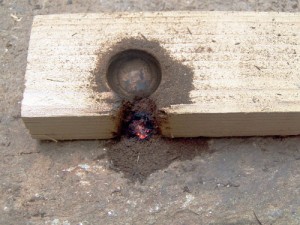 This classic hearthboard is most commonly used. It is constructed with either modern tools or other field expedient sharp implements. The pit is created by carving a slight depression, then the spindle is placed over it and spun in place in order to “burn-in” a smooth pit. Then, the notch is cut into the center of the pit and can be “V” or “U” shaped. This allows the char from the pit to spill into the notch as it is created. A green leaf is often placed under the notch before beginning this process in order to transfer the new coal to awaiting tinder. 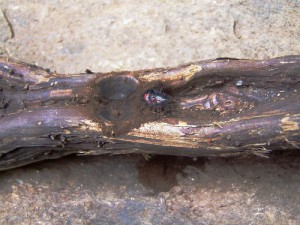 The trough can be fashioned by cutting a deep grove in a board, or, it may be found naturally by virtue of a linear crack in a branch or log, or, some woods have linear lobed spines that naturally create a trough. A perpendicular cut can be used as a pit to stabilize the spindle head. As the char forms, the trough acts as a notch. This method can be used with larger pieces of wood stock. 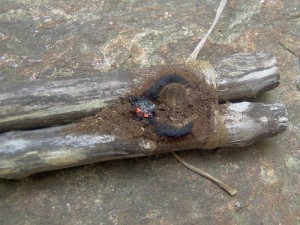 If you cannot find suitable wood large enough for a pit based hearthboard, you can join two smaller sticks together with cordage or sinew. cutting a perpendicular groove will help hold the spindle in place, or sometimes you can just rest it next to the binding material and it will tend to keep it in place while the spindle turns. The space between the sticks creates a trough and acts as a notch. This method allows smaller wood stock to be used. 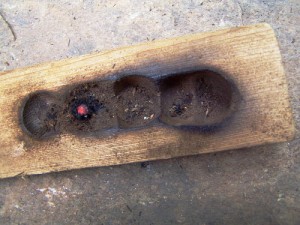 The first pit will become a char collection point when a second pit is started adjacent to it. As the second pit enlarges, it will break through to the first pit, acting as a notch. You can make consecutive pits along a line to continue the notching process with each fire making effort. You can control the pit positioning by leaning the spindle as needed while you spin it.

These are just 4 examples of hearthboards that can be made, but a creative mind might find other ways as well. The important thing is that you know the fundamental elements in hearthboard design so that you can be prepared for implementing a variety of wood materials. Each one has it’s advantages. Take time now to experiment with each design and learn the nuances of each method, because ultimately, it leads to fire!

One thought on “Hearthboard Variations”