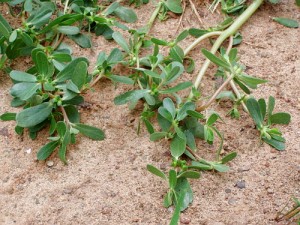 A weed has been defined as a plant whose virtues have not yet been discovered. Many people don’t know that purslane is edible, tasty, very nutritious, and is a wonderful vegetable! It is found throughout North America in waste places and fields. It was originally introduced from Europe.

As shown in the photo, the plant appears prostrate with shiny paddle-shaped succulent leaves. When picking it, break it’s stem to confirm it has clear juice. It’s evil poisonous twin is known as spurge, and when the stem is broken oozes a milky sap. Purslane is a healthy food, but spurge will make you sick.

Purslane (also known as pigweed) used to be cultivated as a food crop in the United States, and is still a major food crop in many countries. It is rich in vitamin E, vitamin C, beta carotene, calcium, iron and quite high in protein. It is considered a better source of essential omega-3 fatty acids than any other leafy plant.

Purslane grows from late spring to fall, so step outside and look around… you may find your next free salad…

4 thoughts on “Purslane / Pigweed – Not a weed, but an edible vegetable”