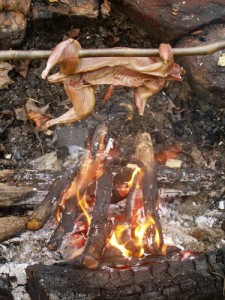 The mention of “Roadkill” usually turns up the nose of those who hear it. Visions of gore and stench proliferate in their imagination. But on occasion, it’s just the end of the trail for the animal without major trauma, and timely for those who know how to capitalize on it. The following is my experience of just such an event.

When I began to teach survival classes I realized that I needed to know how to kill and dress small game so that I, in turn, could teach others to do the same. It’s one thing to trap an animal, but another thing to render it into a consumable meal. I made arrangements with a country gent who raised rabbits to teach me this skill. On the way to our meeting I drove past a dead squirrel on the road and thought “I wonder if he could show me how to dress this as well”. As I got out of the car to inspect the squirrel, a neighbor just off the roadside called to me and mentioned that he witnessed the squirrels’ demise just 5 minutes previously. It appeared to be in good condition, so I collected the prize and continued on my way.

My instructor demonstrated how to kill and dress out a rabbit, and then guided me as I proceeded to butcher one of my own. Next, he showed me how to skin and dress the squirrel. As a hunter, he was well acquainted with this game animal and he confirmed its’ health and freshness. Upon completion, I kept both meats in my refrigerator, and a few nights later roasted each one on a spit over an open fire. Although the aroma of the squirrel meat was new and different to me, it tasted wonderful, especially infused with the campfire smoke.

You may have heard roadkill called “Redneck” or “Country” “fast food”, which, for those who are daring, is not far from the truth. When you learn how to butcher, you do look at things in a different light, and when you dare to broaden your pallet, a bounty of supply is waiting to be had. One thing’s for sure, the price is right – and – when opportunity knocks, you’ve got to be fast!

One thought on “Roadkill a.k.a. Fast Food”