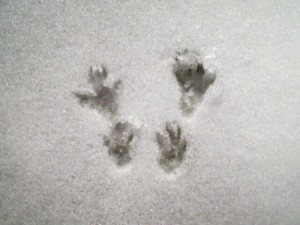 I’ve come to realize that there is quite a diversity in climates throughout North America. My roots in the Bay Area on the West Coast rarely saw snow, contrasted to my current location in the foothills on the East Coast where there can be seasonal snow. Of course, the folks up North are very well acquainted with long term snow and ice. Well, for snow beginners, and a reminder for snow veterans, one of the delights of fresh snow is the amount of activity it exposes by the various critters that surround you. The best conditions for viewing tracks is when the sun shines with clear skies, thus creating the highest contrast for revealing details. Not only can you see the foot tracks, but the walking and running patterns of the animal. Sometimes, you can see evidence of encounters between different animals such as predator and prey. You can also find the local animal trails and their respective dwelling places. The fresh white blanket is pretty much inescapable for mammals, but even the birds land on the snow to feed. So, next time you have a fresh snow, step outside and follow the tracks. It’s a refreshing adventure.