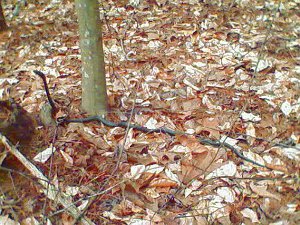 Most of the country is warming up now. In our area, April means that trees go from gray to green. Now, when I walk in the woods I’m on the look-out for snakes… especially when I’m crossing logs. Basically, snakes come in two important categories… venomous, and non-venomous, although, in the extreme South, there are some invasive species of very large constrictors. Generally speaking, venomous snakes in the U.S. are pit-vipers and have a pronounced triangular head, with only a few exceptions such as Coral Snakes and Cottonmouths. Of the 120 species of snakes in the U.S., only 17 produce poison that can seriously harm man, and death from snake bite is a rarity.

I don’t promote handling snakes, and I usually give them plenty of distance. Some folks go ballistic and say that the only good snake is a dead snake… but I disagree… take for example the Black Snake (also known as a Racer). The mountain folk in my area say that black snakes keep away poisonous snakes, so it’s always comforting to see one. They average 4 feet in length and their diet consists of small mammals, birds, insects, frogs, lizards, and… other snakes. King snakes are known for this too. I have known folks who kill these snakes but these snakes seem quite beneficial to me. A few weeks ago I was searching for poles for my teepee and suddenly became aware of a Black Snake (see photo). I was happy that my phone has a camera, so that I was able to capture this encounter. It was a good sign on my path. We parted ways peacefully and I felt richer for the experience.