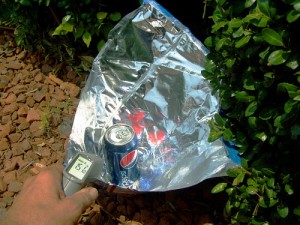 Although my primary interest in survival skills revolves around firecraft, I have begun to research alternate methods of cooking without using fire. A growing trend for cooking, especially in under-developed countries, is by using solar technology. Solar cooking takes time, but requires no fuel or flames. Heat is collected from the sun’s rays and enhanced by reflection, magnification, insulation, and absorption. There are many solar products being developed by humanitarian organizations and by “Preppers” in the marketplace.

However, in the spirit of survival, and by the mandate “what can you do with what you have?”, I decided to use items that I found in the trash. I used a silverized bag from a snack food and an empty soda can. The plan was to cut open the bag and form a reflective bowl, and in the center, place a dark, heat absorptive soda can in which to heat water. The day was hot and I began with room temperature water. I used a P38 can opener to create a hinged lid on top of the soda can for potential food access that was kept closed while cooking. As shown in the photos, the exterior and interior temperatures exceeded 150 degrees F. in about an hour. 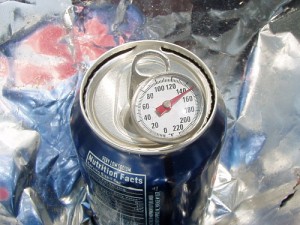 I often keep packets of flavoring from Top Ramen meals to create a nice bullion soup. Another benefit of solar cooking is that you can pasteurize water to kill germs and disease-carrying organisms. Heat the water to at least 150 degrees F. (65 degrees C.) and keep it at that temperature or above for at least 30 minutes. The important thing is to keep reflectors focused while the sun changes position, and if possible, insulate the setup from wind or other cooling effects.