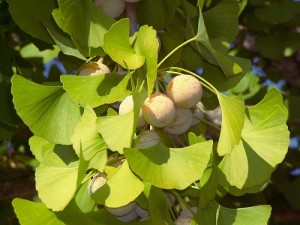 Earlier this week I was walking down Main Street in town, and I noticed some fruit in a tree. It was a Ginkgo Biloba tree, also known as a Maidenhair Tree, which I recognized by the fan-shaped leaves. But I didn’t know if the fruit was edible, so my research began.

Ginkgo trees have an interesting history. Fossil remains show us that they grew when dinosaurs roamed the Earth. They were dubbed “living fossils” by Charles Darwin. Interestingly enough, a 3000-year-old Ginkgo Biloba tree has been reported recently in China. The Gingko now survives only in cultivation. Native to China, it was introduced into the New World in 1784 by William Hamilton in his garden near Philadelphia. Ginkgos are tolerant of difficult soils and air pollution which make them popular as an ornamental shade tree for city streets – hence, a unique urban edible food source.

The female Ginkgo bears fruit that is known for it’s obnoxious smell, resembling rancid butter when the pulp is deteriorating on the ground. The fleshy, yellow-brown fruit-like part of the seed is toxic, and with long-term repeated contact can cause dermatitis. Once it is removed, it reveals the nut which is protected by a brown, paper-thin skin, just like the peanut. Remove the paper-thin layer and the seed can be eaten raw (in small quantities), or (in larger quantities) it can be cooked by roasting over an open fire or boiled and used in soups or porridges. The heating process kills offending chemicals that render it safe and tasty.

So, now we know another food source that just might come in handy. Keep your eyes open next time you take a neighborhood stroll.