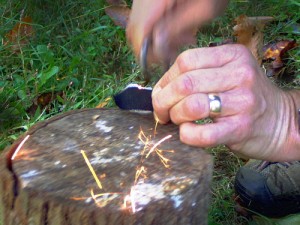 Earlier this year I was a vendor and exhibitor at the Blue Grass Festival, Merlefest. I gave different demonstrations, mostly geared toward the early American Frontier, which included flint and steel fire making. During one of the quite spells of the day, my son, who was helping to man the product booth, suggested that I hold some competitions to stir up activity and interest. So, I held a flint and steel fire making contest that several young lads participated in.

The kits that I provided contained pieces of Texas flint, but, some of the pieces were slightly less than medium sized, and rather awkward to hold. I noticed that one of the participants placed his piece of flint upright on top of the log seat that sat close by. This placement stabilized the flint and he began to get some very good sparks from his steel striker. I’m happy to say that his ingenuity allowed him to catch the first spark which resulted in his winning the competition. And now, gratefully, I know a technique on how to use undersized flint in order to get decent sparks for fire.