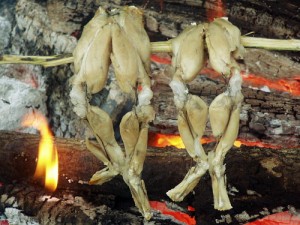 Not many people that I know have a yearning for frog legs. In fact, I hadn’t eaten frog legs until last year. I suppose that it would fall into the category of “bush” meat, or meat that was hunted, and not found in conventional supermarkets. I live in a small town in the country, and as I drove along the local thoroughfare, I saw a restaurant that advertised frog leg dinners. It intrigued me and I knew that I had to eat some.

It was a quick solution to acquiring this special meat as I didn’t want to take time to gig one with a spear just yet, instead, I thought that it might be prudent to eat them conventionally prepared. Upon entering the restaurant I approached the receptionist with a request for 2 froglegs to go, and 2 froglegs left frozen to prepare myself. My son happened to be with me so after I paid for the food, we drove to the bank of a nearby river and enjoyed our meal while surrounded by the native frog habitat. The legs were breaded and deep fried, and quite tasty. It was a memorable moment that was captured for a lifetime.

At a later date, my friends held a get-together where guests each brought something to add to a common soup being cooked over a fire pit in a cast iron kettle. Rather than contributing something to the soup, I decided to thaw out my long frozen treasures and par-boil them before roasting them over the fire. In the end, they browned up nicely, but they tasted much like their swampy origins. The next set of frog legs that I keep long term, I will freeze in milk, as this will tend to draw out any acrid taste. Of course, fresher is better, but that didn’t stop the adventurous tasters from enjoying this delectable delicacy.

One thought on “Roasted Frog Legs”