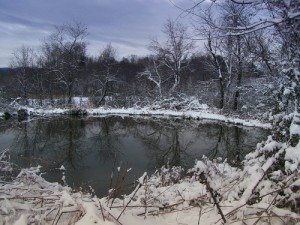 There are two folk rhymes that are very popular… “Red sky at night – sailors delight” and “Red dawn at morning – sailors warning”. But did you know that there are other colors that foretell weather as well?

Clouds are composed of water droplets or frozen ice crystals suspended in the atmosphere. The combination of size and density of these particles effect the reflection or absorption of light which in the end determines the degree of lightness or darkness and color. Dense cloud particles tend to be dark and absorb light producing cool colors while light density in clouds are light and reflect ambient colors.

Dark gray clouds with a lavender tinge often precedes snowfall. In addition, you can feel an edge to the cold in the air.

Dark bluish clouds are produced by rain-sized droplets within it.

Greenish clouds are accompanied by extreme weather and you can expect heavy rain, hail, strong winds and possible tornadoes. As expressed by a friend of mine from the Southern States, the green color that favors blue announces a severe storm while the green tinge that favors yellow announces tornadoes.

Red, orange and pink clouds occur almost entirely at sunrise and sunset. These colors are due to the presence of pollutants in the air such as smoke and are reflected by the clouds. Sailors of old observed this red that indicated a storm was arriving or departing based on the West-to-East travel of weather patterns.

Many folks have come to recognize cloud patterns that announce impending weather, now you can observe their colors as well.