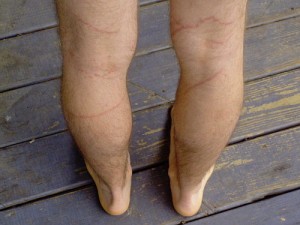 As I reached for my ringing cell phone, I saw that it was from my sons who were vacationing in Florida. Would it be an emergency, or simply a greeting? My younger son announced himself and told me that his older brother had “just been stung by a Portuguese Man-O-War… what should we do?”. Speaking from personal experience, most stings can be alleviated by applying urine. This was my recommendation.

As my distressed son looked for an appropriate place for this treatment, he was notified that there was a fire station close by and so proceeded there with haste. Fortunately, he had already removed the attached tentacles by using a towel and flippers, thus avoiding injury to his hands. The Firemen looked for any remaining stingers and began to spray a vinegar/water mix to neutralize the venom. Subsequent research suggests that this treatment tends to work for many jellyfish but might be counter productive when used for Man-O-War stings. This may vary regionally.

Some paramedics arrived and began to monitor my son for typical symptoms of severe pain, cramping, shortness of breath, and any signs of anaphylactic shock. Man-O-War stings are seldom fatal, but are extremely painful. Of course, people with severe allergies are at great risk and should be treated immediately. Another treatment used by many locals is by applying powdered meat tenderizer which contains enzymes for the purpose of breaking down the toxins to neutralize them.

Eventually, the pain subsided, but lasted for hours. The stings left marks where they struck and can last for weeks. The photo above show the marks that remained after 5 days.

After researching various sources, my recommendation for Man-O-War stings First Aid is to remove tentacles and stingers with a neutral object like a towel or credit card, rinse with salt water (warm if possible), use cold compresses to alleviate pain, take Benedryll if you are not allergic to it to lessen the allergic reaction to the toxins, and watch for signs of anaphylactic shock, if in question, be sure to seek medical attention.

Needless to say, this is a case where I prefer having “second hand” experience, whereas my son will have a story for a lifetime.