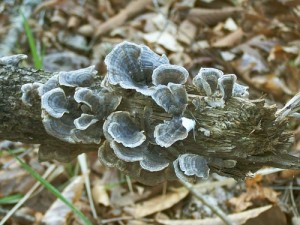 My sons and I canoed down a portion of the Yadkin River. En-route we saw an older gent at the river’s edge asleep in a lawn chair. Behind him was a tent where he lived. Some months later I met him in a store and struck up a conversation. It turns out that he prefers living outdoors and considers himself “houseless” not “homeless”. I figured that I could learn a lot from him and so we began to spend some time together and have developed a friendship.

One of the things that he showed me is the bracket fungus known in the U.S. as “Turkey Tail”. In Japan it called “Riverbank Mushroom” which was appropriate in this case. It’s technical name is Trametes Versicolor. Some folks consider it non edible because it can be too corky & tough, but they are not toxic and my friend has boiled them on many occasions for dinner.

They generally attach to decaying logs along the back edge of the fan and have no discernible stem. It is an annual rather than perennial and can been seen throughout the year, but my friend says that they are most fresh in the Spring. Like many other fungi, they are also said to have medicinal benefit in reducing tumors.

So, if you get stranded in moist woodlands or along their rivers, you can find an edible fungus to stave off your hunger.