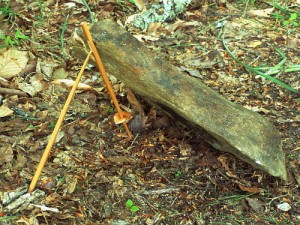 I spent the weekend surfing the web getting familiar with various types of primitive traps and triggering devices. I pondered the use of modern-day materials and applications. While I was doing some grocery shopping, I saw a package of bamboo chopsticks on display. My eyes glazed over as I envisioned a two-stick deadfall incorporating these timeless culinary tools. I promptly grabbed a package and put them in my shopping cart and headed for the check-out counter.

I began modifying the first stick by cutting the thin tip into a slightly flat chisel edge. The thick end, or handle, will be set on the ground and this piece becomes the upright support. The second stick we’ll call the “bait stick”. The handle (thick end) will have a top side and bottom side. On the top side I began to make a notch starting 1″ from the end, and cutting about 1/16″ into the stick and tapering out an inch toward the narrow end. Beneath this cut, on the bottom side, I cut a series of slight perpendicular grooves that when assembled will be placed over the chisel point of the support stick. You can cut grooves around the sharp end to better secure the bait.

When possible, I select a rock (or other heavy object) that has a flat or straight edge that I place on the ground so that it functions as a hinge and is much more stable when the trigger is placed on the upper end. It will in effect have a 3-point support. The general rule is that the heavy object should be 5x heavier than the animal to be caught.

The size of the bamboo chopstick trigger will work for small animals but by applying the same construction to larger sticks, it can be scaled up for larger game. When trapping, it’s wise to set up multiple traps to increase you chances of success.