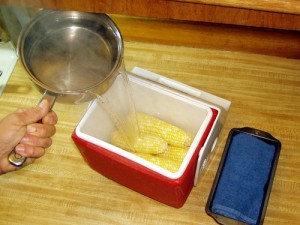 Here’s another instance of an old technology using new resources. The old method of using a hay box to cook food has seen variations over time. Essentially, food is heated in a vessel, then left in an insulated enclosure to hold the heat for hours while the contents cook. Hunters would heat a pot of food in the morning then bury it in a hole with coals and cover it securely. Upon returning later in the day, they would uncover it and enjoy a cooked meal.

I was recently introduced to the idea of using a cooler to cook corn-on-the-cob for a group of people. You can shuck as many cobs of corn as needed and lay them inside the cooler on the bottom, then cover them with boiling water. After about 30 minutes they’re said to be ready to serve, but they can stay in the water much longer as needed.

I decided to give it a try on a smaller scale, by using a lunch box. Because the lid was not insulated, I improvised by placing a towel inside a tray that I laid over the top of the water for better insulation. I tested the corn after 30 minutes. Although it was edible, I found that it was done to my standards after an hour, and, it was very good.

The advantages of this cooking technique is that once it is set, it does not require more fuel or open flame, it can be left unattended and conserves energy. It could work well in a travel scenario where you may be driving over long distances. Folks who are conscious about plastics off-gassing could place their food in metal containers within a cooler and add further insulation for better efficiency and stabilization when traveling.

Give this cooking method a try and test it for yourself. As always, practicing before hand makes for successful results when it’s needed.

P.S. It dawned on me that the ears of corn that I used were pulled right out of the refrigerator… had they been at room temperature, the cook time would have been shorter – perhaps just the half hour that I had first heard.

One thought on “Cooler Cooking”