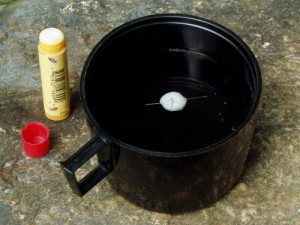 While I was growing up, “Chapstick (brand name)” was the only game in town, but now there is a flood of lip balm brands on the market that come in a wide variety of fragrances, tastes and compositions. The primary use of a lip balm is as a moisturizer. We think initially of our lips but some folks use it in other places that are exposed to the elements. Applying it to your cheeks can prevent wind burn. Many lip balms now include SPF protection from the sun.

In a camping scenario it can be used to enhance tinder performance for starting fires. You can cut a thin pad of balm and press a magnetized needle through it enabling it to float on water for an emergency compass or you can tie the whole container onto a fishing line to use as a float. In a domestic scenario it can be used to write a message on a mirror, a pane of glass or a windshield. A friend told me that he uses it on the face of his gold clubs for better ball control.

I carry a medicated lip balm that contains clove. It helps to heal the cracks on my finger tips in Winter time. It helps to stop bleeding of small cuts and soothes abrasions. Because of it’s fragrance I’ve also used it as a deodorant in short term situations.

Whatever circumstances that you find yourself in, whether in emergency or for convenience, lip balm will most likely find a place for good use.