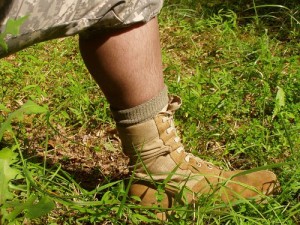 I learned some interesting facts about a very manly friend of mine that shared some of his experiences while in the Marine Corp. He was stationed for a time in Camp Lejeune, North Carolina and spent plenty of time performing field maneuvers while there. A Gunnery Sargent gave him and his squad some surprising advice “get yourself some panty hose to wear”.

On previous exercises it was not uncommon to find literally a couple of hundred ticks and chigger bites on each soldiers body, mostly from the waist down. So, my friend and the members of his squad decided to follow the Gunnery Sergent’s advice and bought panty hose in a color they would affectionately call “desert brown”. Competing squads scoffed at them as they set out on maneuvers, knowing that his squad was wearing hosiery under their fatigues.

Miraculously, at the end of each day as they inspected their bodies for these prevalent pests, NONE were found from the waist down! This fine-mesh undergarment had blocked all ticks and chiggers! Not only did the hosiery prevent bites, it also reduced “hot spots” and blisters on their feet.

Many folks may chuckle at the thought of Marines out in the field wearing hosiery , but if you consider the motto “adapt and overcome”, this great “out of the box” thinking achieved superior results. So, you’ve got to ask yourself, on your next foray into tick and chigger infested country, are you man enough to wear panty hose?

12 thoughts on “Block Ticks And Chiggers”