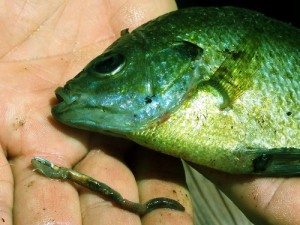 After years of reading bushcraft and survival books, I finally decided it was time to try a primitive fishing technique using a fish gorge.

In the past I have improvised Pull-Tab Fish Hooks, so I decided to modify a pull-tab again to improvise a fish gorge. Essentially, a fish gorge is a straight stick, sharpened at both ends with a line fastened in the middle. This is skewered into bait with the trailing point left slightly exposed. Various baits can be used but I decided to use a worm.

My strategy was to chum the water with bits of worm to attract and excite the fish so that they would aggressively swallow the bait covered gorge. On this occasion it worked only marginally but I did get a bite where the gorge lodged in the mouth of a pan fish. When using improvised hooks, it’s prudent to lift he fish out of the water ASAP so that if it releases, the inertia will land the fish in the boat, on the dock, or safely on the bank. Sure enough, after flopping around, the lodged gorge came loose but I was able to capture the fish and released it into the water to live another day.

My understanding of the gorge technique is that the fish swallows the gorge into it’s gullet so I continued to fish with hopes of achieving this result. In due time another pan fish totally swallowed the gorge and it was terminally caught. So, realize that this is not a catch-and-release method, and you should plan on eating your catch.

NOTE: I have the luxury of fishing out of a private pond, but these survival techniques may not be legal in Public waters… check your local regulations before you attempt to practice them.

2 thoughts on “Fishing With A Fish Gorge”