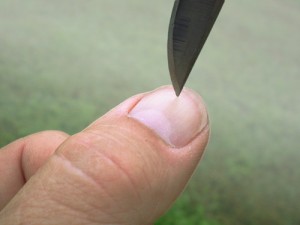 Without a compass or GPS, how do you determine direction in the fog when you cannot see the sun or landmarks? We know that the sun rises in the East and sets in the West, and if we know the approximate time of day we can tell basic direction. We know that at Noon the sun is due South so mid-morning the sun is South East and in the mid-afternoon the sun is South West. The trick is locating the sun to gain our bearing.

The “thumbdial” method is reminiscent of the “sundial” but works in reverse. A sundial when correctly oriented can determine the time of day. A thumbdial, when you know the time of day tells you the direction of the sun, thus providing orientation. The secret of the thumbdial is that it reveals the sun’s location by revealing it’s shadow.

Begin by standing in an open area and placing the tip of a knife blade on top of your thumbnail and rotate it slowly, watching for a slight shadow to be revealed on the matte textured surface. The location of the sun of course is on the opposite side of the knife blade from the shadow. The wide and narrow silhouette of the blade helps to accent this. The sun’s brightness is defused in fog but still maintains a brighter presence which is revealed by the very slight shadow.

The shadow that you see may be slight, but that does not diminish it’s importance in determining what could be the critical revelation of direction.

6 thoughts on ““Thumbdial” – Finding Direction In The Fog”