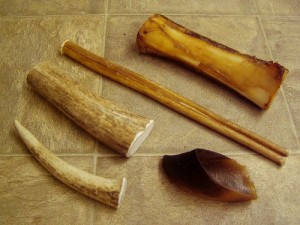 Who knew that Abo (Aboriginal) resources could be acquired in a city? We can understand that items like edible plants and vines for cordage could be found in yards and parks, and grocery stores provide various in-bone meats. However, there are animal parts that the general public is not interested in that urban Abos seek.

I wrote an article called “Crossover Tools And Applications” where I described my experience of shopping in a beauty supply store and found resources that worked well as survival tools. Similarly I stopped in a pet store and was surprised to find items that could be used for primitive tools and associated projects.

There were elk antler pieces stocked for prairie dog chews that I could use for flint knapping billets and points for pressure flaking. Short to long tendons were stocked as dog chews that could be hydrated and stripped for binding cordage or for stitching thread. Different sized bones were stocked that could be used as tools for digging or as a weapon such as a club or broken into shards for use as projectile points or as a fish gorge. There were also cattle and sheep hooves meant as dog chews that could be used for primitive ornamentation or made into a bell for ceremonies or as a trip line motion alarm. Raw hide sticks (not shown) can be re-hydrated and cut into strips for lashing or for forming knife sheaths.