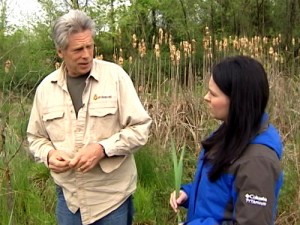 I was delightfully surprised to receive a call from Stephanie Berzinski, a general assignment reporter at WXII 12 News in Winston-Salem, N.C.. She was producing a news segment called “Survival Basics, Are You Ready?”. At the time of the phone call she had already done an interview with an underground bunker manufacturer located in the Triad area and wanted to show alternate ways to be prepared in the event of a catastrophic event.

I explained that my instruction is different than the more recently publicized Prepper trend in that I focus on more immediate short-tem emergencies such as when a person because of circumstances becomes stranded. I teach how to stay alive, how to find help or become found. In tandem with that, I show ways to exploit the resources on hand. This approach provided the other end of the spectrum from the bunker approach that Stephanie wanted to present to her audience.

The extent of my provisions for our discussion fit into a 20 gallon bin. The items were geared toward a power outage scenario in an urban setting which accommodated for loss of heat, light and water, but I also show Stephanie some local edible plants that she sampled. I demonstrated how some trash items could be useful when you don’t have proper tools. while searching for edibles I came across a beer bottle and demonstrated how to remove the bottom by hand so that the piece of glass could be used as a knife. I also mentioned how car headlights could be used to start a fire and how a plastic Gatorade bottle could be used to make soup by rotating it over an open fire.

Having the correct tools for the job is always preferred but it also pays to know how to improvise when you don’t. Thanks to Stephanie, her viewers now know that there are ways that they can prepare for catastrophic events on a shoe-string budget whether “bugging out” or “bugging in”.