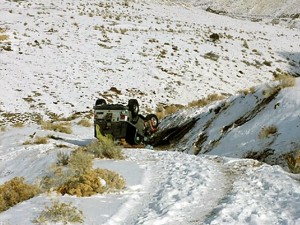 I was captivated by a news item recently where a family group composed of a 34 year old man, girlfriend and 4 small children headed out to play in the snow on a Sunday. They chose a mountainous area in Nevada popular for hunting chukars but failed to return. Consequently a search and rescue effort was launched. Rescuers were very concerned as temperatures were expected to drop below zero and plunged to minus-16 degrees on Monday. Apparently in better weather there would be occasional hunters or traffic in the area but due to the weather conditions it was not active.

In the process of travel their Jeep had overturned just off a road (see photo) and could not be up-righted nor could they start their engine for warmth. The man who was a mine worker and hunter built a fire beside the vehicle just minutes after the Jeep rolled down the snowy embankment on Sunday and kept the flames going until rescuers found them on Tuesday. They found scrap wood for the fire and burned a spare tire for warmth and to create black smoke for signaling. They also heated rocks for warmth while the group stayed in the upside-down vehicle for shelter. Fortunately they were dressed for cold weather conditions.

I’ve seen hot rocks used to bring a container of water to a boil but I had not thought of rocks as a heating device. In an enclosed area this would exclude the danger of flames and carbon monoxide. Fortunately they had some food and water available.

Although they were located in a patchy cell phone area – rescuers used cell phone signals and footprints to locate the family. Some of the group suffered from slight exposure and dehydration, but none had frostbite.

Under the circumstances I thought that the survival techniques that they employed worked well. A news website article reader, Corey Jordan, offered these suggestions for off-road travel: “1) Never wander far from civilization alone. Always have more than one vehicle. 2) Don’t depend on a cell phone. Have a two-way radio, a CB radio will do. 3) Have an emergency kit aboard. This would include first aid kit, blankets and something to start a fire. Mylar blankets can double as shelter halves. Include anything that you may need in a situation like that which occurred. 4) Have a recovery kit. Recovery straps, come-along (or a high-lift jack). Include a jack board and a compressor (runs on the car battery). If they had a recovery kit, it would have been possible to have righted their Jeep. 5) Food and water for two days. 6) Get some experience driving off road in rugged terrain…”.