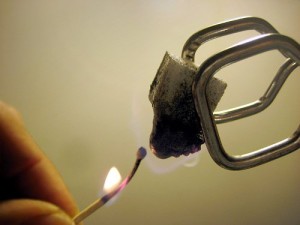 Back in the days of my early teens I belonged to a “science club” that met after school. The science teacher demonstrated many interesting experiments but the ones that were the most popular were the ones with fire. The most spectacular exothermic demo involved potassium permanganate, sugar, and sulfuric acid that produced a brilliant flame. Another demo was more subtle yet amazing that involved a sugar cube which is the subject of this article.

We experience the catalyst properties of carbon all the time in firecraft.
We usually refer to this material as “char” which is partially burned or carbonized cellulose. We carbonize cotton swatches by pyrolysis when they are cooked in a can void of oxygen to prevent ignition. We produce nearly black “char” powder when we perform fire-by-friction that when exposed to increased heat produces a coal. Carbon ashes can also be added to fine cellulose to capture weak sparks produced by the flint and pyrite/marcacite fire method.

Another benefit of charred material is that it is dark and thus absorbs heat. This is particularly effective when performing solar firecraft (see “ICEE” Lid Fire Method). Carbon is the stepping stone to fire.

I have found that charcoal is also instrumental in the ignition of a campfire. In lieu of using an accelerant, saving bits of charcoal for use in the building of a campfire helps to capture the ignition source and speeds the transition to larger pieces of fuel sized material.

The more you practice firecraft, the more you understand the importance that carbon plays is creating fire.