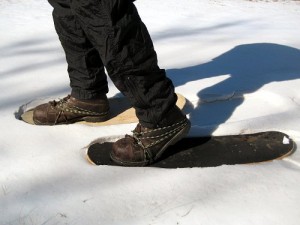 After performing some maintenance tasks one day I made a trip to a dumpster which can be a treasure trove for improvisational folks like me. I was surprised to discover the decks of two skateboards. They had no wheels or truxs, just wood boards curved at each end with empty holes where the hardware had originally been mounted. I confess that I didn’t have an immediate idea for their use, but I took them anyway. I proudly showed them to my friend. Knowing my survival bent, he said “I see snowshoes”… Bingo! I now had a plan.

Having read a myriad of survival books I have seen a number of corded binding techniques for improvised snowshoes that looped over the fore foot portion of a shoe and then looped behind the heel. This keeps the foot attached to the snowshoe but allows the heal to rise and fall with each step. This enables the snowshoe to stay relatively level with the surface of the snow being traversed. I used some paracord for my bindings but other cordage could be used as well.

I live in the foothills near the Blue Ridge Parkway in North Carolina. This year has been particularly cold but our area has had no snow so I went up to higher elevation in the mountains. The snow was not deep but it did allow me to get a feel of these improvised snowshoes. I found that the cordage loosened up a bit as I trekked and required some tightening. I know that there are different types of snow in various parts of the country and of course much deeper, but I have to think that these improvised snowshoes could make a difference in those conditions.

What are the chances and in what environment would finding skateboards occur? An urban environment would probably yield this type of resource. Most likely they would be used where cars can’t go or where there is no transportation. Who knows. I guess the point comes back to “what can you do with what you have in an emergency”. This was certainly a fun experiment with the materials that I had found.