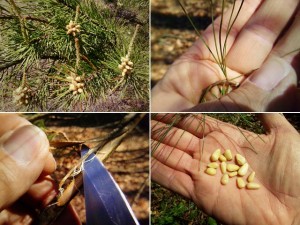 Pine trees are probably the last thing that you think of in terms of edible plants but they offer a number of surprising benefits. Pine species vary in offerings at different times of the year but essentially there are four edible parts: pollen, needles, cambium bark, and nuts.

In the Spring, pine trees have new growth with upward growing tassels. The tassels contain pollen that will be released if tapped or shaken. To collect the pollen, place a bag over the blossoms before shaking the branch. The collected pollen can then be used like flour for baking or frying.

Pine needles are abundant all year long and can be used to make a tea rich in vitamin C. There is a caution about red pine because of it’s toxicity. White pine is preferred. You can tell the difference between the two: RED pine has 3 needles and WHITE pine has 5 needles; each needle group matches the number of letters of it’s name. You can chop up the needles and add them to water as you bring it to a boil to brew a tea. Warning – Pine needle tea can cause miscarriage for pregnant women.

Another year-round resource is the inner “cambium” bark layer that lies just beneath the outer bark. It can be collected off the tree trunk to be dried and ground into flour. I prefer thinner layers from young branches that can be eaten raw but can also be roasted or fried and eaten much like potato chips.

In the Fall, pine cones begin to release their seeds that we know as pine nuts. The yet unopened cones can be collected and when they dry will release the seeds. You have probably already eaten these in salads and as toppings on hummus.

So don’t forget the stalwart pine as a source of food in an emergency situation. Of course you don’t need an emergency in order to try these edible parts. In fact, by getting acquainted with them now will alleviate an experiential shock in a time of need. You may find some of them quite pleasant if not just a wonderful association with the great outdoors.