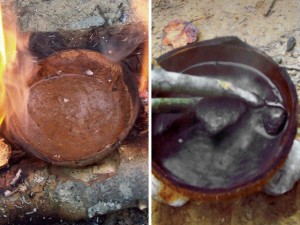 Virtually every environment has resources for survival, some are better endowed than others. Although our first priority should be to learn the benefits of our own region it is fun to learn and experience the uniqueness of others. Previously I had used a more indigenous resource of a cabbage leaf in which to boil water (see “Boil Water In A Cabbage Leaf“) but now I wanted to try using a more exotic resource for this purpose – coconut shells.

Coconuts don’t grow in my neck-of-the-woods so I am grateful that my local grocery store stocks them in their produce section. They had already been shucked of their outer layer but if you acquire a whole coconut I describe on my “Edibles” page how to remove both the outer layer and crack open the inner layer as well. By cracking open the coconut shell around it’s equator it produced two nice “bowls”. I saved the coconut milk and removed the white pulp inside. These bowls had round bottoms and thus needed support to keep them upright when holding water.

There are basically two approaches to heating water in the coconut shell or any other vessel – by “outside heat” or “inside heat”. “Outside heat” is generally accomplished by setting the shell in coals or suspending them over a fire. It’s interesting to note that a flammable vessel will not burn through to the water because the water inside limits the temperature and prevents ignition. “Inside heat” is accomplished by heating stones in a fire then placing them into the water. Heat is elevated incrementally as each stone is added. The first stones can be removed and replaced by newer hot stones as needed.

For the “outside heat” method I selected the smaller shell to heat by fire so I notched two parallel logs on their facing sides and placed the bowl above them. This allowed space for the fire to heat it from beneath. I just added kindling as needed. It took quite awhile to achieve a boil as the coconut shell is quite an insulator.

For the “inside heat” method I used the larger shell because stones displaced the water as they were added and the vessel needed more capacity. I placed it on the ground and supported it using three stones. I selected many smaller stones (not river stones as they may explode) to heat in a fire. I used two sticks to transfer the stones from the fire to the shell. It was quite awkward to do, so look for a future article on stick transfer tools as I explore other stick devices and methods for this purpose.

It was a great experience. Next time that you plan a campfire, visit your local grocery store and pick up a coconut and try these boiling techniques for yourself.