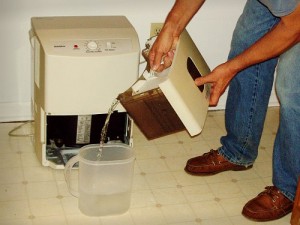 Water is one of the top priorities of survival and is the mainstay of civilization. Most dwellings today are plumbed for potable water. Urban areas receive municipal water from sources such as reservoirs, lakes, or rivers. Rural areas may draw water from wells or cisterns. However, if in an emergency these resources were not available a potential source of water might come from moisture condensation associated with an electric powered device.

There are two devices that immediately come to mind: dehumidifiers and air conditioners. Each device produces water via condensation as a result of their operation and can be collected for use. If filtered or boiled the water can be consumed, otherwise, it can be used for alternate uses such as hygiene.

A retired Navy Veteran once told me that he had served on a submarine that used a desalinator to distill sea water into pure drinking water. It was limited in it’s production and used only for consumption. The submarine also operated an air conditioner. What he and other crew members would do is put a piece of cloth in the condensation collection pan of the air conditioner and wick out the water into a pail that was placed beneath it. They used this for “Marine showers” for bathing with washcloths.

The resulting volume of water produced by these devices will vary based on the humidity of their environment in combination with their frequency or duration of use. There have been machines manufactured called “atmospheric water generators” specifically built for the production of water but can be costly to obtain and maintain so they have not flourished in todays market place.

Conceivably, if you have a source of electricity, you can manufacture water for limitied needs. Perhaps if you are trapped or stranded in a building that is earthquake damaged or if you are locked in a building or under seige, this would be a critical resource for survival, so keep it in mind should you ever encounter this situation.