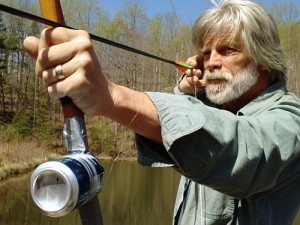 Over the years I have tried many fishing methods, and there are many more ways that I have yet to do. One of them is bowfishing. I decided to pursue this with the materials that I had on hand. I realized that I needed to attach a fishing line to my arrow so I needed to improvise a reel for my bow. Archery reels are often hand wound onto an open spool.

To pursue this approach I found a soda can and cut off the top using a sharp knife. With a little trimming I left two tabs on opposite sides that I bent out for the purpose of attaching to the bow. I used duct tape to wrap the tabs in order to prevent scratches on the bow, then I taped the tabs onto the bow itself, mounting the newly formed reel below the hand grip.

I had monofiliment fishing line on hand so I wound it around the can so that it would unwind from underneath the left side of the can to avoid entangling my hand while drawing back the arrow.

The challenge that I faced was that the monofiliment was “springy” by nature and tended to spool off the can too readily. I overcame this effect by placing a bobby-pin flat side up over the reel from the open end of the can so that the line could easily slip out when the arrow was released. 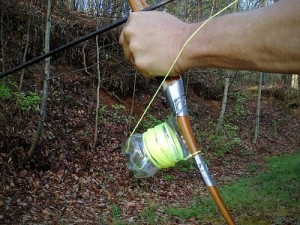 After my initial experience I did a little research and decided to make a second version using a plastic bottle that had a slight hour-glass shape. This helped to prevent line from sliding off of the reel. I also used braided cord instead of monofiliment because it was comparatively limp and more easily stayed in place. I happened to have twisted nylon mason line that I used in liew of commercial braided fishing line. Another benefit of using the plastic bottle is that there are several “grooves” at the bottom that acts to hold the line in place while drawing back the arrow.

Either reel version works. The monofiliment line is light and fast but tends to tangle. The braided cord is heavier but more easily handled. Either way these are improvised reels that could serve you well in a pinch. Why not give it a try for yourself and see which one works best for you.