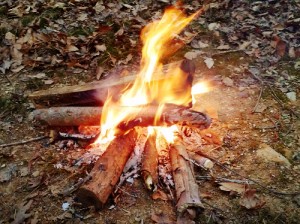 The flint & steel fire method generally requires charcloth to catch a spark that is created when striking the steel on flint. Charcloth is carbonized cotton cloth that is created by submitting the cotton material to heat sufficiently to cause a chemical change thus transforming it into carbon. It can be described as being burned without catching fire. When properly cooked it produces a velvety black material that is not brittle but slightly supple. Over-cooked material is brittle and the material is “spent” where the combustible elements within it have been consumed and can’t catch a spark.

Charcloth is traditionally made by placing small squares of cotton material in a small metal container that is placed on coals or in a fire. It must have some minor holes or loose seams to allow pressure to be released as a result of gasification of the cotton material within during the baking process. A brown smoke is emitted for a time and when it dissipates the container is removed from the heat and allowed to cool before it is opened to reveal it’s contents.

Metal containers are used as a barrier between the cotton and fire. What if you didn’t have a metal container with which to make charcloth? I wanted to know if a different barrier could be used instead of metal and decided to try using sand as a barrier to cover a strip of cotton cloth that would be placed underneath a small campfire. 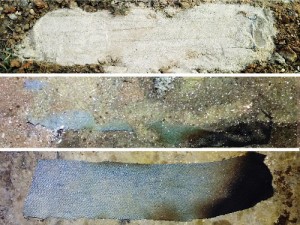 Because the season was wet I collected some sand and spread it out to dry by the sun. Then I dug a shallow trough sloping down to an inch in depth on one side and spread a layer of sand across the bottom. Next, I laid a strip of cotton jean cloth on top of that with the top end just touching the surface. I filled the trough with sand until it was level with the ground to see how char might form at different depths of coverage by the heat generated by the coals and fire above.

I built a campfire (not a bonfire) over it and let it burn for about an hour whereupon I carefully removed the coals and sand to reveal the test strip of cloth. I was surprised to find that the nearly exposed end was properly charred while deeper material was left unscathed. As a result of this finding I would just lay the cloth flat on the ground and sprinkle sand on top just enough to cover it from view. I used the charred end of my test strip to catch a spark with flint & steel to validate proper baking then proceeded to make a flame to complete the fire making process.

In the end, I found that this method might have it’s place in certain circumstances but I might prefer to use what I call the “Quickie Charcloth” method of directly burning the cotton cloth and extinguishing it before it’s consumed. This was a proof of concept exercise and validated one approach to making charcloth without a metal container. It also created a great moment of solitude by a campfire… another opportunity to enjoy the great outdoors!