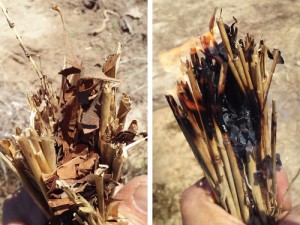 Occasionally I like to walk along a nearby river and quite often I like to do my “good burn daily” to keep up my firecraft skills. The rivers edge is quite sandy and is a safe place for this activity. I usually try different materials and methods each time. On this occasion I decided to use my wallet magnifier (a thin plastic Fresnel lens) to start a solar fire.

In the past I have used a Pine Needle Tinder Bundle that required a flat cut across the top end to provide a surface upon which to focus the lens. I figured that the nearby tall dead grass stalks could be used in the same way. After I gathered the straw material I broke it into six inch lengths and used a full length of grass to wrap it together, then cut one end flat. After focusing the lens on the straw material I found that it was too coarse to hold an ember so I decided to modify the bundle for better results.

Most folks have heard of a “birds nest” tinder bundle where fine tinder is placed within a wad of material surrounding it and in this manner I realized that I needed finer tinder at the core of this bundle of straw so I collected dry leaves and crumbled them in my fist into tiny bits and used them to fill the core of my straw bundle. The leaf bits were dark which is effective in retaining heat and the closeness of the bits was effective for transferring heat within the core.

It happened to be quite windy that day so at first I had to shield the bundle slightly to prevent heat loss until the embers began to ignite. As the coal began to grow I exposed it to the wind that helped to accelerate the process and with an added breath a flame was born. During this process I was able to handle the bundle much like an ice-cream cone but had to tilt it to the side once embers began to fall.

It would be simple to set this down beneath a campfire lay that had been prepared ahead of time but at this point I just extinguished the bundle as I had been successful in this technique and continued on my walk along the river. I encourage you to try making a solar fire this way because it is effective in using the native material at hand when you find yourself outdoors and need a fire.