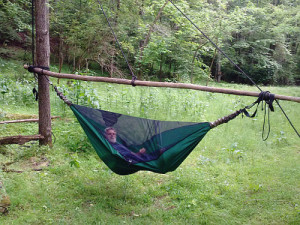 Several years ago I became aware of hammocks. I began with a net hammock, then a cloth with nettles hammock, then I went to the next level and bought a Hennessey Asymetrical Expedition hammock. What really sold me about hammocks are: hanging beats hard ground; they can be suspended over unsuitable rough terrain, an incline, or water.

I have been fascinated with the variations of tie-offs. I wrote an article “hammock on a rope” where I suspended my hammock off of a single suspended rope using prusick knots for attachment at each end.

I was walking in the woods recently and noticed some sloping trees and wondered if they or any tree could be used for a hang if there were no nearby trees. I have often looked for poles for my teepee in that area and it occurred to me that I could anchor one end of a pole to the trunk of the tree and suspend the other end from higher up the trunk to make the pole level. I could then tie off each end of the hammock onto the pole.

The configuration would be much like a sailboat where the tree would be like the mast and the adjacent pole like the boom or bottom rail of the sail. The booms are tied off at their end to control their lateral movement.

I decided to try this configuration out. The first pole that I selected was too weak and broke! After acquiring a second more robust pole it held my weight. There’s quite a compression on the pole that makes it bend. I decided to apply a mid-line of support that really made it secure. lateral sway was prevented by staking out the line at the outer end.

This took considerable cordage that might not be standard hiking gear but it’s nice to know of this method should you have only a single tree for hanging and might lend it’s self to weekend camping. But in the end it’s just fun to do!