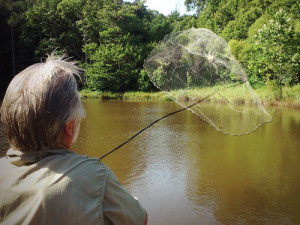 If there’s one thing that I’ve learned it’s that one style or method does not fit all, this is typically true in fishing. Casting lures and bait are accomplished in different ways. Similarly I learned that throwing a cast net has a variety of methods and I began the journey of finding a method that fits me.

Some years ago I acquired a used cast net but never took time to unravel it to explore it’s dimensions or how it was used. While watching various survival programs I noticed how significant a cast net can be for survival by catching fish for bait or for consuption. So I decided to learn more and began to look up videos on-line and discovered that there are as many ways to throw one as there are people who demonstrated them.

After viewing many videos I learned about the parts of a cast net that include the hand line, swivel, horn, braille lines, netting, and lead line with weights. Gathering the net to throw is called “loading” and is basically held by the throwing arm or by the opposite arm from which to spool off. Many of the demos used eight and ten foot radius nets whereas my cast net has a five foot radius but the approaches for each are basically the same. In the past many folks used their teeth to hold part of the bottom lead line but there are newer approaches that eliminate that method.

After many throws I couldn’t get the net to open properly and so went back to the videos to look for the details of loading it up. The break-through came when I met a fellow who had casting experience and mentioned that the net is not thrown level but slightly upward, about thirty degrees, and that did the trick for me. Having a mentor can make a significant difference.

As of this writing I haven’t settled on a favorite method but I am an advocate of learning more than one way thus giving options for differing net sizes or casting situations. Here are two links by “Fisherman Alex” and “Salt Strong” that I have found helpful. I would be glad to receive comments from experienced net casting enthusiasts on their favorite method.

2 thoughts on “Learning How To Throw A Cast Net”