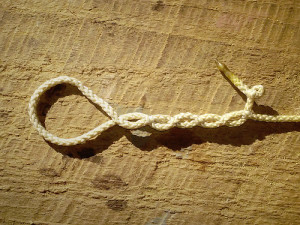 I was teaching some classes at Turtle Island Preserve recently and one of my fellow instructors shared a project that he had been working on that created an adjustable loop using braided synthetic cordage.

Many hammock enthusiasts are familiar with “whoopie slings”. They take an end of a braided cord such as Amsteel and insert it into the side of the cord further down and direct it into the hollow core of the cord for several inches and then redirect it back out again. This is known as a spliced choker. The cord’s length can be changed by adjusting the size of the loop that is created using this method. You might be familiar with a Chinese finger trap toy that uses the same principal of constriction. The compression of the outer sheath caused when a load is applied to the primary line holds the woven portion of the cord in place.

Similarly my fellow instructor’s cordage loop operates on a compression basis as well but instead of being routed down the core of the cord it takes a serpentine path that waves back and forth through the main line. As illustrated in the photo it has several cinch points. You may also notice that the end of the cord has been fused using a flame but formed into a point. This point acts as a needle for weaving the cord’s end back and forth through the primary strand. I call it a serpentine compression weave.

Whereas making a spliced choker often requires tools, the serpentine compression weave is accomplished very simply by using the built-in “needle” and only requires a way to fuse the pointed end. This would be an easy campsite project using braided synthetic cordage and can be used in a variety of ways.