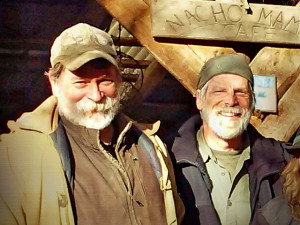 Yesterday I attended the memorial service of Preston Roberts. He passed away July 24th 2017. Millions of Americans knew of him from his part in the History Channel series “Mountain Men” where he shared various adventures with Eustace Conway and was a co-founder of Turtle Island Preserve (TIP) In Boone, North Carolina. Although I have enjoyed watching the episodes featuring Eustace and Preston, it was my privilege to meet him in person when I volunteered time at TIP as an instructor at various events and camps throughout the years.

Although our activities were held in separate areas at TIP events I still enjoyed sharing a table with he and his wife Kathleen at the end of the day at “Nacho Mama’s” dining area with the rest of the staff and volunteers. Preston was a regular fixture at Tip but I was amazed at all of the folks in my neighboring county who were art students of his during his Public School days. That was one of the many themes that was shared from attendees at the memorial service. Eustace shared some of Preston’s experiences while teaching at the Boy’s Camps held over the years. He took delight in sharing his knowledge and experience with others, which is also a passion of mine. 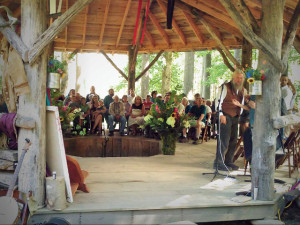 It was fitting that the memorial service was held in the Pavilion that Preston had designed and built. His family and kin were seated inside while various folks shared their thoughts and remembrances about Preston. Eustace (seen in the photo) spoke of his character and expressed his gratitude for their friendship over the decades. Although Preston will be missed, his contributions in service and investment in the lives of others will go forward for generations.