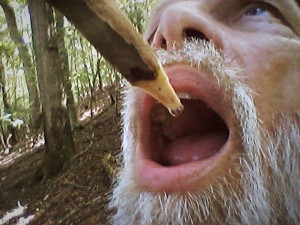 I’ve watched a number of reality programs on television where survival experts in the jungle or woods will cut a grape vine in order to obtain water. Here in North Carolina in the Foothills there are numerous grapevines suspended from high in the tree tops in the woods. Until now I’ve only used them for swinging on for fun or once while hawking we would pull on them when they intersected squirrel nests to see if there were residents there.

Today I set out to collect poles for my teepee for an up-coming event. Although the majority of trees are deciduous here there are also some pine trees which I prefer for their straight lines and light weight. As I was walking through the woods I spotted a pole that had a grape vine entangled around it. I had to cut the vine in order to free the pole and I decided that this would be a great time to see if it indeed would yield water.

Like so many containers of liquids, having only one open end is not efficient in dispensing it’s contents, especially if the opening is small. The way to expedite the flow of liquid is to make another opening to break the vacuum within the container and allow air to flow inside. You can see this provision on gasoline cans with an extra opening available on the opposite side of the spout. In like manner, if you cut a vine through at one end you need to cut the vine higher up to release the water inside.

You can see in the photo how the vine was cut to a point that helps direct the seeping water which I caught straight into my mouth. It came in drips but I imagine that the volume and flow would vary according to the size of the vine and perhaps the season. In any case it actually worked! And I was delighted. I will look forward to testing this with larger vines in the future.