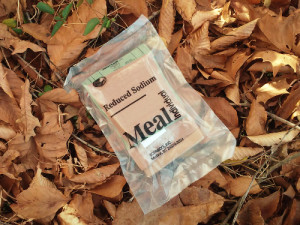 My first awareness of the “Meal, Ready-to-Eat” (MRE) came about when I was an Assistant Scout Master (ASM) while my sons were in Boy Scouts just after Y2K. A fellow ASM brought MREs on field trips but at that time I was pursuing primitive skills and bushcraft so if meals didn’t require fire or coals I wasn’t interested. Well, just the other day I was offered an MRE from a fellow who passed it on from a food bank. Being resource minded and curious, I accepted his gift and decided to take the plunge on eating my first MRE.

Before I broke into the package I decided to do some on-line research to learn about MREs and what to expect. I learned that MREs were developed in the ’80s by the military but the manufacturers have in more recent years developed civilian MREs aimed towards disaster relief and outdoor camping. The military MREs are a little more robust in it’s offerings of food and accessories but all MREs contain at least 1,200 calories and come in a variety of menus. In 1990, a Flameless Ration Heater (FRH) was added that uses a water-activated exothermic reaction pouch that creates enough heat to warm it’s entrée. 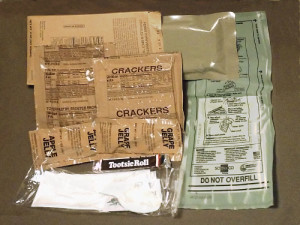 My MRE was a civilian product with “reduced sodium penne with vegetable sausage crumbles in spicy tomato sauce” (sounds good, huh?). The packaging is designed to be opened by hand and each pouch displays the nutritional information of it’s contents. Only a small amount of additional water (not included) is required to activate the FRH that displays instructions on how to activate and apply it for heating the entrée.

I began to open up the various packets to examine their contents and finally attended to heating up the entrée. The recommended heat time is 12 minutes but I flipped the entrée packet over for an additional 5 minutes. When I opened the retort pouch I measured the heat and found that it had reached 170ºF… very impressive!

Sometimes food, like jellies, that have been stored in pouches over time, often require a little kneading to reconstitute it’s contents that may have separated over time. Although eating out of a retort pouch may not be glamorous, I found that the contents tasted quite good, and if I were real hungry it might even be delightful!

These meals are only intended to be eaten for a maximum of 21 days and not for a sustained diet. They are however great for short bivouacs and emergency situations. I’m grateful that there are a number of menus available. A military veteran friend said that the contents of each pack would often become trading items among soldiers to satisfy their particular tastes.

I still enjoy preparing food over fire or coals but this flameless meal has it’s place and can be stored for years in a cool environment for future use when needed.