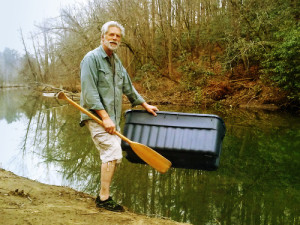 I am always looking for ways to use alternate resources to improvise solutions when regular methods are not available. In various seasons of the television series “Alone” different contestants have constructed boats in order to reach a better area for fishing or to explore new ground. With that image in mind I acquired a large used plastic storage bin that was big enough for me to sit in and I thought that it would be fun to see if I could use it as an impromptu boat.

I grabbed a paddle and headed down to the local river. Being that it was late January it was very cold which may have contributed to the challenges that lay ahead. I decided to “put in” water deep enough so that I would not “bottom out” once I stepped inside. As I entered the bin it was quite wobbly and before I could completely sit inside the bin it cracked all the way down one side! I wondered if it was the cold weather or old age that may have caused the plastic to become brittle and if this perhaps would have been better attempted at a warmer time.

I had to abort the plan, climb up the river’s edge and retrieve the sunken bin from the cold water using my paddle. That night I reflected on the day’s event and decided that I would test the virtues of duct tape and make a repair to the damaged area while fortifying other possible weak areas as well. In addition, I would “put in” the bin in shallow water so that my entry would be stable and I could “push off” to deeper water for total flotation.

I returned the next day with the repaired bin, ready to test my ideas. I successfully placed the bin over the shallow river bottom and as I sat down inside I heard a crack! I could tell that the bottom was compromised and it slowly began to take on water. I began to push off to deeper water but it became apparent that my back end began to lower as my foot end began to rise.

I tried to even out the load by scooting forward while placing my legs over the prow but it only proved to be insufficient and unmanageable. It became apparent that even without the breach of the plastic bottom the improper balance of weight would not allow the bin to be used as a plausible vessel in the water.

In the end it was a fun experience and I was pleased that at least my duct tape repairs and reinforcements held. I walked away with that satisfaction of having tried another proof-of-concept experiment that added to my experience base while providing a very memorable occasion.