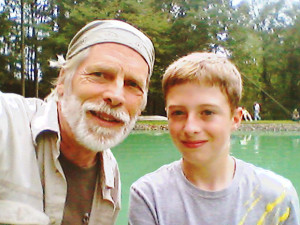 If you believe in Divine appointments, then you can appreciate that my trip to the library crossed paths with a local preacher that I knew from a shift at the YMCA. He had two fishing poles in hand and as I approached he recognized me and said “did you know that you can check out fishing poles from the library?”. That took me by surprise but it was good to know. He continued to tell me that he and some other men at his church were pursuing a mentoring effort and were taking some boys to go fishing at a private pond close to their church right after their morning service. He invited me to join them.

It’s in me to share my passion of outdoor skills and knowledge with others and so I attended the church service the next day. Afterwards they fed the boys and men some grilled hot dogs and beverages and when we were finished we headed over to the pond. Various men brought gear to lend to those who didn’t have some. I decided to show the boys “hobo fishing with a soda can” I knew that the first line in the water usually gets the fish but I wanted to set up the young man in the photo first so that he could begin fishing before I made my first cast.

With that task completed I made a couple of casts and got a bite but while I handed in the line it broke and my lure was gone. I tied on another lure but without any further success. I could hear the men in the distance say “I guess that can rig sure costs less than a rod and reel but if it works, why not?”. The bait of the day was chicken livers, worms, and power bait. Out of the total group effort who fished that day only two fish were reeled in. the young fellow that I had helped to set up had two strong bites, one of which also broke his line. He was using the loaner pole from the library and the line was too light for the size of the fish. Lesson learned… bigger fish require bigger line.

I was prepared to demonstrate flint and steel firecraft at the end of the fishing session but a downpour of rain sent us all scurrying to our cars for cover. It just wasn’t going to happen that day, but there’s always the future. When folks get together for outdoor activities it’s alway fun to share my craft and help to teach and prepare the next generation basic skills for survival, not to mention it’s just fun!