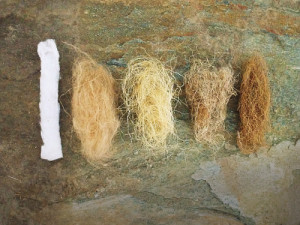 A few weeks ago I got re-acquainted with the fire roll firecraft method. I had been inspired to re-explore this by watching various social media videos. The simplest and most reliable materials used were cotton fiber and ashes but I learned that other materials could be used as well so I began experimenting with different powders and fibers.

I used ashes as my base powder for testing fibers and was successful using cotton, jute, sisal, dogbane, and coconut husk. These were all natural fibers. Some of the fibers were obtained by unraveling cordage. What didn’t work was artificial fibers from dryer lint and cigarette butts. 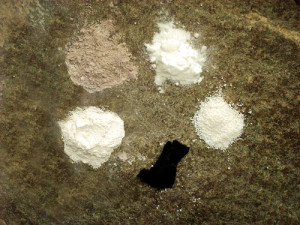 Unraveled cotton balls provided my base fiber for testing different powders. I successfully used wood ash, baking soda, comet cleanser, char cloth (carbon), and Oxi-Clean detergent powder. These were generally carbon/oxidizer related materials. Not everything worked that I tested such as coffee creamer, instant coffee powder, artificial sweetener, baking powder, Boraxo, chalk powder and salt. The sweetener/sugar related powders would just melt together by the heat and harden the fiber roll, causing them to flatten out and were not roll-able. Some rolls got hot but not hot enough for igniting an ember.

In the process of testing these materials I began to perfect my technique of preparing the roll, rolling it, and the signs of successful ignition. Here are some observations and suggestions.

When I roll up the thick fibers I end up with a roll that resembles a cocoon or fat AA battery. I begin by rolling it in one direction by hand so that it successfully adheres to it’s self. I continue to roll it in one direction using the upper board to compact it further while warming it up internally. Once it is reduced in diameter similar to a cigarette or pencil I use both hands to roll it back and forth.

I begin at a moderate pace then add speed and pressure over 20-30 strokes. Sometimes at a certain point you can feel a certain “grip” of friction that signals it’s ready to uncover and look for a dark spot or a wisp of smoke. You can feel the roll with your fingers for a hot spot and after a few successes you will know the temperature of a success. If the roll is not hot enough just replace it and roll vigorously again. In the humid atmosphere here sometimes it’s best if you see a wisp of smoke to just let it smolder a bit to allow it to build heat because if you blow on it too soon sometimes it cools it off enough to snuff it out. Once the ember appears you can use it in the conventional manner to add to a “birds nest” or tinder bundle to work into a flame. You can use the left-over fibers used for creating the roll for this purpose.

The fire roll method is my new best fire-by-friction friend and I’m sure that more tinder tests will be performed in the future.