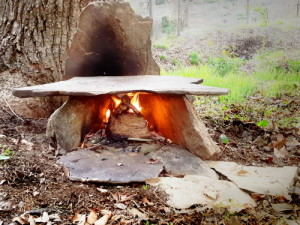 I have watched the popular television series “Naked and Afraid” and noticed how difficult it was to maintain a campfire in a rainy environment. Some participants solved this problem by making a small fireplace out of stones in order to keep the fire lit during a rainstorm. I wanted to explore what it would take to make one.

There is a basic safety rule to not use wet rocks in or around a fire because a hot fire will cause the moisture within the rock to expand, thus causing the rock to explode. When selecting rocks be sure that they are dry and preferably non-pourous. Although I collected rocks along a creek I selected ones that were not in the water and elevated off the ground where possible.

There is an old saying “the White Man builds a large fire and needs to step away from it’s heat, whereas the Native Man builds a small fire that he can hover over to keep warm”. With this in mind I decided to build a small fireplace with small fires having the advantage of using less fuel and less materials for construction.

I began by selecting an advantageous site to construct the fireplace. I chose a spot behind a large tree on the leeward side so that the tree would help to provide shelter from inclement weather. It needed to be set out a bit from the tree so as not to harm it. I made a hearth floor of flat stones to somewhat protect the roots from the heat but also to keep the fire elevated off of the ground so if it rained the coals wouldn’t get wet from the soil.

Next, I placed flat supporting rocks on edge in a pattern similar to the outline of a baseball home plate, meaning, two stones were placed in a “V” at the rear with two parallel stones for the sides. I placed a flat stone on the top, leaving open space over the “V” area for the smoke to vent. This I hoped would create a draw for smoke when I pushed the firewood and coals toward the back. Behind that I placed a flat stone as a shield to the tree but also leaned it forward over the “V” beneath it to protect it from rain.

After my fireplace was constructed I momentarily removed the flat top rock to more easily assemble the tinder and sticks to start the fire and once the flame was established replaced it.

Years ago I wanted to fry eggs on a slab of rock but it was heated it too fast and it cracked so this time when I used one to cover the fireplace I initially made a small short term fire that would dry out any moisture that might be present. It was successful in not cracking and I was able the following day to cook some bannock on it.

It rained that night and I wondered how the fireplace would fare. Would it be wet in the morning? Nope! Although there were puddles present in the surrounding ground the ashes were dry inside!

As always, be careful on your site selection and what materials that you select to build with. An initial small fire to dry out any moisture is a good idea before you make a hotter and longer burning fire.