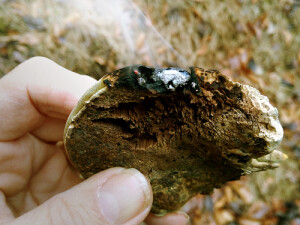 Recently I found a cluster of red belted conk that was growing on the roots of a tree stump. It is a bracket fungus that is prevalent in Winter often off of decaying wood. As I sought it’s identification from friends and consulted a mushroom reference book it mentioned that The outer band would melt if exposed to a match due to the high sap content. It was an old specimen but I wanted to test this claim.

I lit a match and held it at the edge. No melting took place but eventually an ember appeared and began to smolder. That reminded me of a previous article “smoldering cattails” where natural materials would allow a person to transport a live coal from a previous fire while traveling to the next remote location. Another option for transport is dry punky wood.

I also wanted to test it for catching a spark similar to another bracket fungus “fomes fomentarius” or “amadou” but without success. I am still exploring the structure of bracket fungus for the layer that is best used for these purposes and would welcome any comments from those with experience in harvesting these fungus specimens.