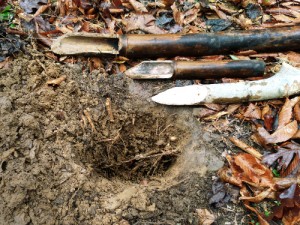 The term “bushcraft” is often used for a variety of activities outdoors but originally discribed crafting tools or shelters in the wilds. Modern day bushcraft enthusiasts are often outfitted with fancy (and expensive) tools and gadgets but it’s good to know how to make things with very basic tools such as a knife. That is what was used to make the digging sticks in this article.

If you have a knife, you wouldn’t want to use it to dig in the dirt and make it dull. A sharp knife is very important and can be used to create other tools for a variety of purposes, in this case, for digging a hole. Holes of course might be needed to anchor posts, make trenches to divert rain water, to make Dakota hole fire pits, etc..

In the region where I live there are bamboo groves… an excellent resource for primitive projects… a virtual hardware store. However, saplings and trees are the general rule throughout the U.S. and have been used for constructing projects and crafts throughout history. In this case I used a Bowie knife to make these digging sticks but a pruning saw would have been a great asset.

A bamboo stick can be cut halfway through a single node, on opposite sides of the shaft towards each end, then split at the mid-line. This will create two scoops. I used my knife to do this and batoned it with a stout stick. The knife has a full tang so it can be struck on the end of the knife’s handle to drive the point down into the shaft to initiate the split between the two cuts. The end of the scoop can then be sharpened. To make a hand spade, include a single node to be used as a handle. When more leverage is needed, you can include more nodes for a longer handle. A single pole can thus produce both types of digging sticks.

When using a branch or sapling, you can make a cut several inches from the end and split from the end down to the cut line where is can then be sharpened. A blade shape is more effective than a round sharpened end because it allows you to scoop out the soil instead of just poking a hole into it. If the wood is green, you can harden the wood by heat treating it by a fire to eliminate the moisture.

The expression “the more you know the less you carry” applies here as you can use your primary tool to make others. As usual, I encourage you to practice now so that you will be prepared in an emergency situation.