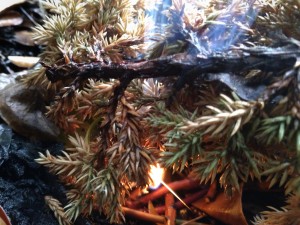 Recently while watching a video of a birthday celebration some trick candles were used that would re-light every time they were extinguished when blown out. I thought that type of candle could be used under breezy circumstances when starting a Campfire.

I set out to acquire some at the local grocery store and discovered that today’s version differed from my childhood variety which were wax with an infused wick. This current type appears to be a very thin infused plastic rod so I purchased it to see what it could do.

To begin my experiment I stood at the kitchen sink and lit one, and was sorely disappointed that there weren’t more sparkles. I watched as it burned down and blew it out with sadness but was taken back when it relit by itself! Now this showed promise!

Next, I stepped outside but it was a drizzley day so I pulled a dead juniper branch from within a bush and kneeled under an overhead cover and set up the tinder in a lean-to configuration using a rock. I placed the sparkle candle underneath the branch and lit it. Slowly it began to sparkle and then I blew it out. Almost immediately it relit by itself! I repeated that process several times.

The concept was validated but a more robust fire starter (vs. igniter) would be more reliable, especially in survival situations. Nonetheless it was a fun experiment to explore more firecraft possibilities.