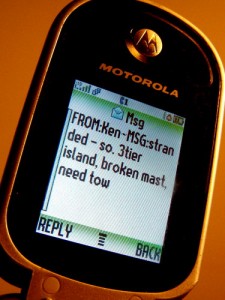 When you’re on the move or away from land lines, cellular phones are a tremendous way to communicate, providing that you can get a good enough signal. When using your phone, voice transmission uses a lot of power and drains the battery more quickly, thus jeopardizing long term use. When you experience marginal signal or your battery is low, text messaging is a great alternative for many reasons…

Text messaging uses “Short Message Service” or SMS provided with most digital cell phones. It operates with a “store-and-forward” mechanism that transmits to a Short Message Service Center or SMSC where it is relayed to the intended recipient. If the messages do not reach the recipient upon the first attempt, then the SMSC will try again. SMS delivery is not guaranteed but employs “best effort” delivery. The duration of this persistence varies with each phone company. It’s like posting an electronic note which does not require a conversation.

Because of the small bandwidth used, SMS has small character limits which have spawned “txt speak” like “CUL8R” (see you later), but in emergency situations, it’s best to not be cryptic. Also, a message can be composed and sent discreetly and silently if needed and has been employed by several rescued kidnap victims. There have been many reports that in the aftermath of Hurricane Katrina, when no phone calls were getting through, people were able to communicate through texting.

So next time you see “No Service” conduct your own experiment and try sending a text message and see if it gets through.