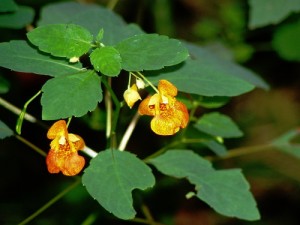 Jewel Weed is found in the Southern Appalachians and in much of the eastern U.S., usually growing in cool shaded moist areas and on creek banks. The interesting thing about Jewel Weed is that it often grows in the same areas as Poison Ivy and can be used for it’s antidote. By crushing the stalks of the plant to release the juice, you can rub the material on the skin that has been exposed to the Poison Ivy or other irritants like stinging nettle, mosquito bites and insect stings. It’s a virtual panacea for skin irritation. It’s reported to contain two methoxy-1, four napthoquinineóan anti-inflammatory and fungicide that is the active ingredient of Preparation H. In my area Jewel Weed is blooming. Take a look at the photo and see if you can spot some Jewel Weed in your area.