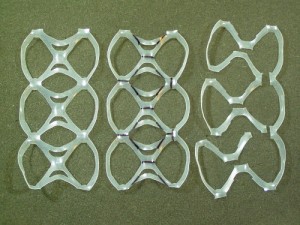 Similar to the discovery process of the Silverware Figure 4 Deadfall, I had time on my hands to ponder the usefulness of objects in my environment… in this case, a plastic yoke that holds together a six pack of aluminum cans. I studied the maze of connections within the plastic sheet and realized that a person could create a quarter-inch wide strand that could be used as cordage in a pinch. After tracing the longest possible route, I grabbed some sissors and began to separate the web at strategic points and eliminate un-needed parts. I ended up with a strand that was over 3 feet long! I marked a yoke in the adjacent photo to illustrate where to make cuts. However, be advised that the plastic is slippery in nature and can stretch, but it IS usable. The six-pack yoke can also be cut in other ways. If you cut out rows of loops, they can be interwoven at the ends like you would join rubberbands in a series. Another possibility is to cut out individual loops to slide over bundled items. Take time to try this for yourself and have some fun.