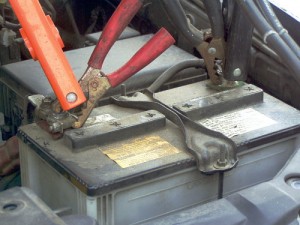 Almost every driver has experienced getting into their car to take off, and when they turn the key to start the ignition… nothing!… a dead battery. Sometimes, this is just inconvenient, and the situation can wait until the motor club can come and get you started, or, you can hook up a battery charger and wait until it has a sufficient charge. But other times, circumstances demand immediate action for departure.

Yesterday, I watched as a truck pulled up in front of a car that had a raised hood. Two men set about attaching booster/jumper cables to the batteries of each vehicle. One person sat in the truck and reved up the engine while the other person sat in the car, waiting briefly to let the car battery charge up a little before attempting to start the car. However, there was only a clicking sound, but no action. I had stepped up to the scene at this point and examined the corroded contacts. I mentioned that about 80% (or more) of battery problems stem from dirty contacts. As time was urgent, and there were no convenient tools, I suggested another approach. Because I had heard clicking, I knew that starting the car wasn’t too far from happening. At first I suggested that the clamps be placed right on the battery terminal instead of just the clamp around it. Having done that, there was no difference in results. Then I suggested that we get a second set of cables to increase the amount of electricity transferred from the truck. If both sets of cables don’t fit on the terminals, you can attach the first clamp on the terminal and the second clamp upon the first clamp. That was the trick. The car started and the driver was on his way, able to get professional attention to his battery situation.