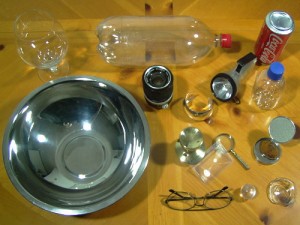 Translated from Latin, equinox means “equal night” and on this day of the year, daytime and nighttime are equal length everywhere in the world. This year Spring Equinox (also known as Vernal Equinox) begins On March 20, 2010. In the Northern Hemisphere, daytime will become longer, and the nights will become shorter, until it reaches it’s maximum length at Summer Solstice (June 21, 2010), whereupon the days will begin to grow shorter until they are equal in length as nights at Autumn equinox (also known as Autumnal Equinox) September 22, 2010. The Southern Hemisphere experiences the opposite season during this time.

There have been various historical and religious celebrations on this day, but I celebrate it because, for me, it begins the optical firecraft season. The higher the sun is in positioned, the better its’ performance to generate heat. A noon-time sun can be more advantageous when using fluid optics such as when using water in an open vessel placed over tinder beneath it. I have included a photo of some of the various items that I have used to make fire by the optical method. Although this season works best, larger devices such as a page-sized Fresnel lens almost always works as long as there is direct sunlight. Size DOES make a difference when using optics. So whether you reflect light off a mirrored surface, or refract light through a lens, now is the time begin experimenting and practicing, so that you will be ready for an optically generated fire.