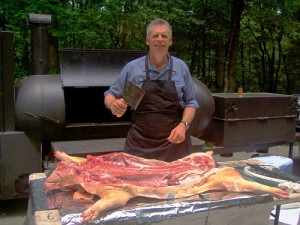 The event was “Trail Day” at the W. Kerr Scott Reservoir where volunteers gathered this morning at 08:00 and worked until noon, cutting a new trail by following marked contours along the hillside. The reward: roasted pig, that began cooking yesterday in a huge trailer-mounted smoker. The pit master (and owner) was “BBQ Man” Chad Eller, a Park Ranger who has competed in various BBQ cook-offs. Along with him was his friend the “dominologist” (domino fanatic) and solo night crew member for the 22 hour smoke/roast event.

When I first heard about the pig roast I had visions of “pit roasting” like the IMUs in Hawaii, and, being on my “learn to do list”, I asked if I could come and help. But when Chad drove up pulling his massive trailer, I knew that he had a different approach, but one that I could learn from. After setting up a prep table, we rolled out aluminum foil and laid the split open – 100 lb. pig on it’s back. We cleaned off undesired tissue and then Chad injected his special apple juice baste, followed by a dry rub with paprika and an assortment of other spices. Meanwhile, briquettes were lit in charcoal chimney starters, being readied to start the hardwood fire. Chad described the various portions of meat and the strategy of heat control for the duration of cooking. 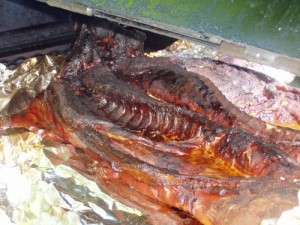 The end product was awesome! Finger-pulling tender and tasty. We took samples of various parts of the pig, including the tongue. Low and slow… it’s hard to beat the temperature and time combination for such a succulent result. Well, now I’m catching the BBQ fever, and look forward to a Hawaiian IMU (below ground), Samoan UMU (above ground), Cuban Roast (covered pit with fire on top) cooking adventures in the future.