Not long ago, while perusing a country store, I came across an innovative lantern known as the Dietz “Warm-It-Up” Lantern, also known as the “2000 Millennium Cooker” Lantern. It was developed around the Y2K phenomenon. Folks were concerned about eminent danger back then, and, a decade later, folks are STILL concerned about the future and are preparing for tough times ahead. 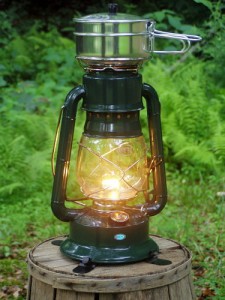 In my efforts toward preparedness, some time ago I began to assemble my BOB (Bug-Out-Bag) and learned that it was strategic to pack items that could serve more than one function in order to save weight and space. With this strategy in mind, the “warm it up” lantern gained my interest for preparedness because it provides both light AND heat. So, I began to test the lanterns’ capability.

Hurricane style lanterns are built to shield the flame inside and come with a vented cap on the top. The “warm it up” lantern has a removable cap that can be exchanged with a bracket that holds cups above it to capture the heat from the flame below. The kit comes with 2 stacking aluminum cups that include a lid… similar to a double boiler used in cooking on a stove. The lower aluminum cup holds 1 3/4 cups when used alone, and 1 1/4 cups when used in conjunction with the upper cup. The upper cup holds 1 1/4 cups.

I read the instructions provided with the kit. First, I attached the stabilizing feet (optional hold-down pins included) onto the bottom of the tank, swapped out the lantern cap with the bracket, then I filled the fuel tank with 1 pint of lantern oil. Then, I adjusted the wick to about 1/16th inch above the frame plate, lit it, and let it warm for about 5 minutes. Then, I adjusted the wick up to create a flame that stood about 3/4 inch high. It was quite bright, and probably larger than I would usually use because a smaller flame will consume less fuel. A flame adjusted too high will cause sooting on the chimney and cup. I filled the larger cup with room temperature water and placed it on the bracket with no lid. This table shows the heating results.

I burned the lamp for 2 consecutive evenings logging in 8 hours. In the interest of estimating the burn time, I removed the remaining fuel and saw that it used less than a cup of fuel. Based on the volume and time already spent, I estimate that the total burn time would be 20 hours per tank. A smaller flame could dramatically extend this time.

I am DELIGHTED with the “warm it up” lantern. Imagine having a power outage and still being able to have light in the dark and have a hot meal too! I have chosen to add this to the Survivaltek Store where you can purchase this and other survival related items.