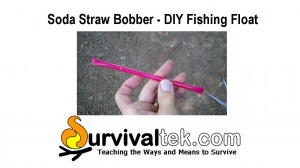 Have you ever gone fishing and forgot your bobber? I recently went fishing with a Czechoslovakian friend who told me that he used to fish using floats made from feather quills. I decided to explore that concept further and found that floats have been made from many air chambered items found in nature such as porcupine quills, swan feathers, and river cane, to mention a few. One rainy day, I stopped by the Post Office and upon exiting the car, I noticed a straw lying on the ground, and it struck me that it could be made to float as well. The following are the instructions on how to do the same.

Clip the tip of the straw at a slight angle, and then cut a 1/16th inch strip, which by virtue of the elongated shape, is larger than the straw’s diameter, and will slide onto the straw to use for fastening the fishing line. I took my Leatherman needle-nose pliers in one hand and clamped the end of the straw about 1/16th of an inch from the end, and with the other hand, I used a lighter to melt the end, thus sealing it. I repeated the process on the other end.

I took the fishing line and pinched it into a tiny loop at the place where I wanted to attach it to the bobber. By sliding the ring on the straw to the end, you can create a small gap through which to thread the fishing line loop, starting from the center portion of the straw and threading it out to the end. Once the line is passed under the ring, slide the ring towards the middle of the straw, thus exposing the fishing line loop which you pull over the end of the straw, then continue to pull it down to the other end and over, pulling it tight, thus creating a hitch on the straw. Now slide the ring within an inch from the end to provide the best results from the bobber. Once you bait your hook, you’re ready to cast out! It works great! You can view the entire assembly on my video posted on YouTube. Click HERE to watch.